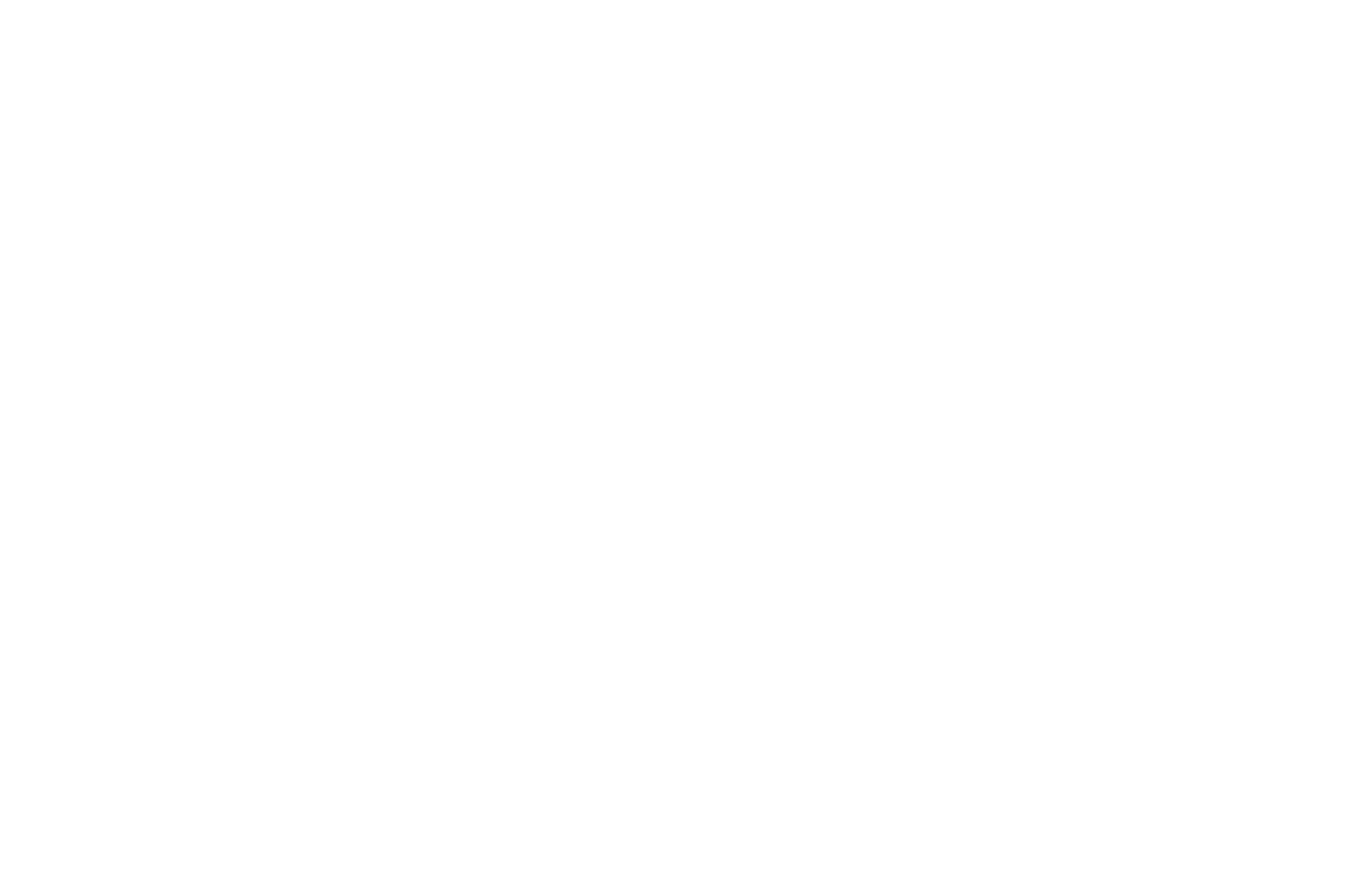 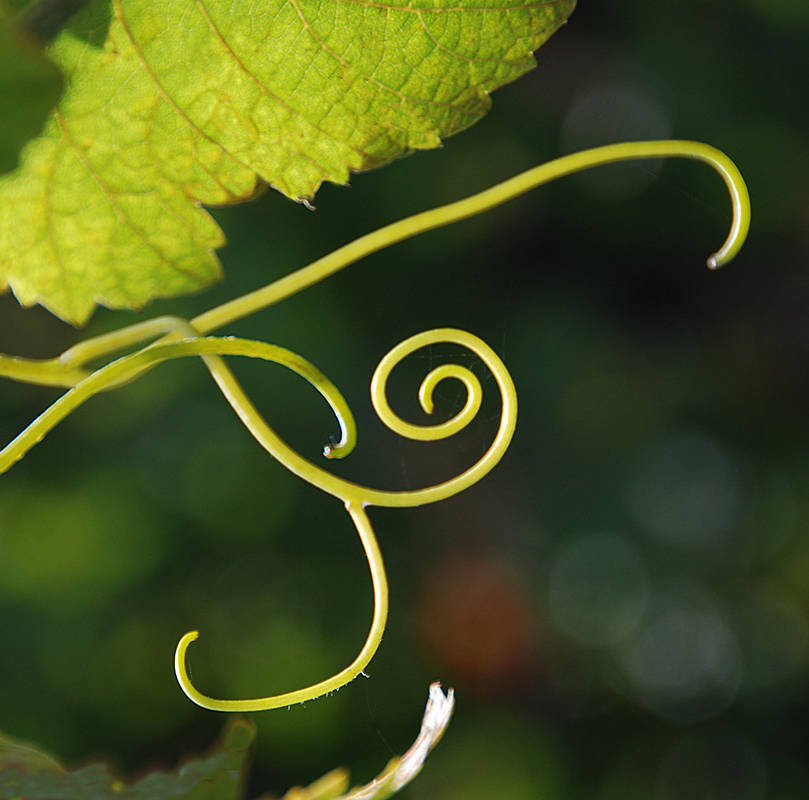 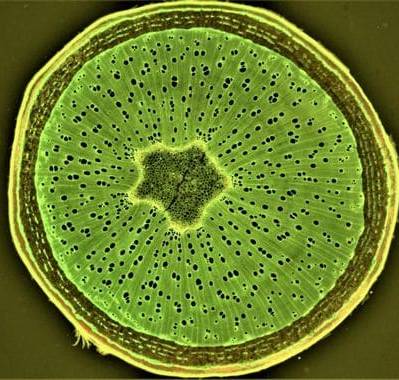 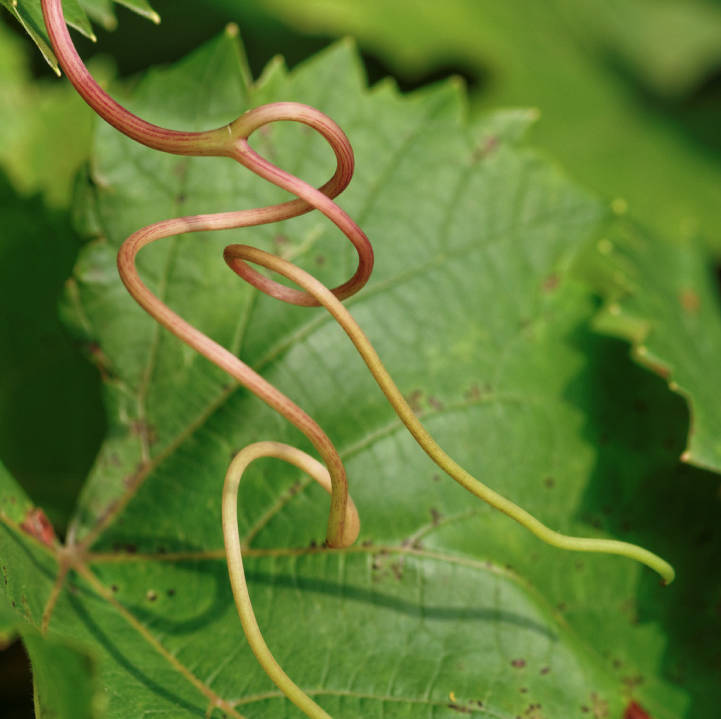 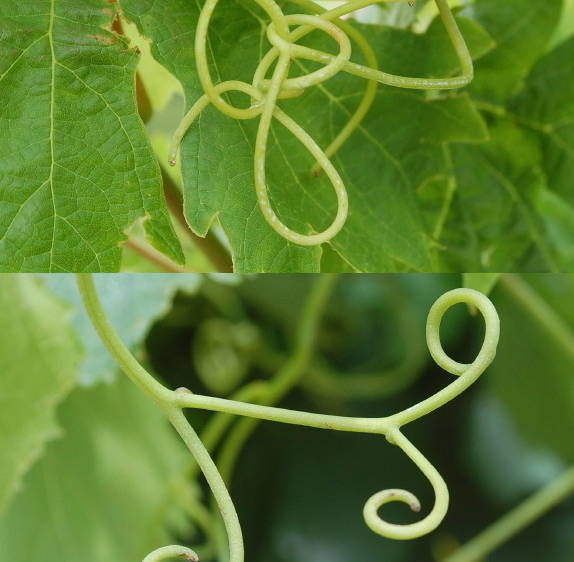 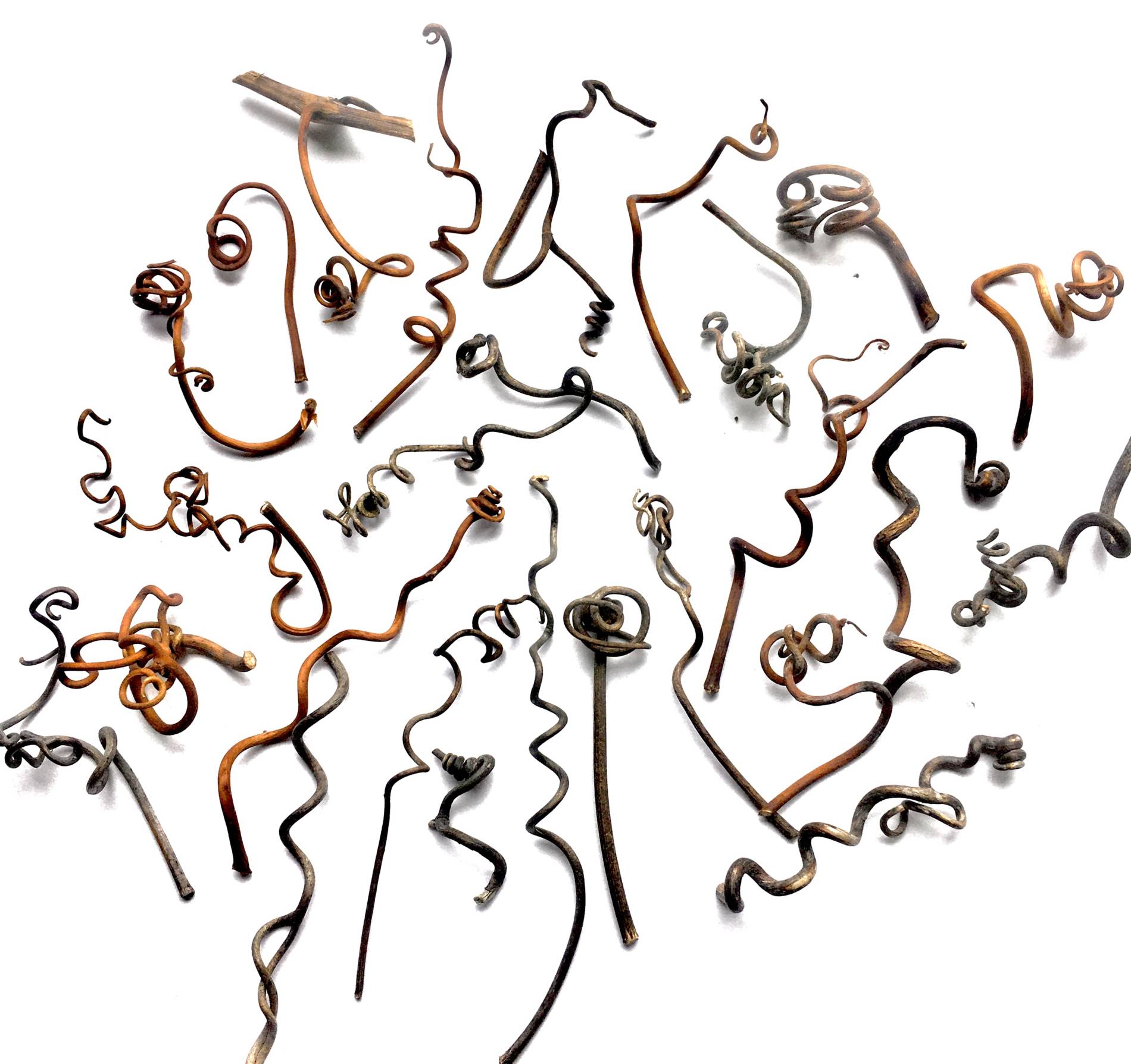 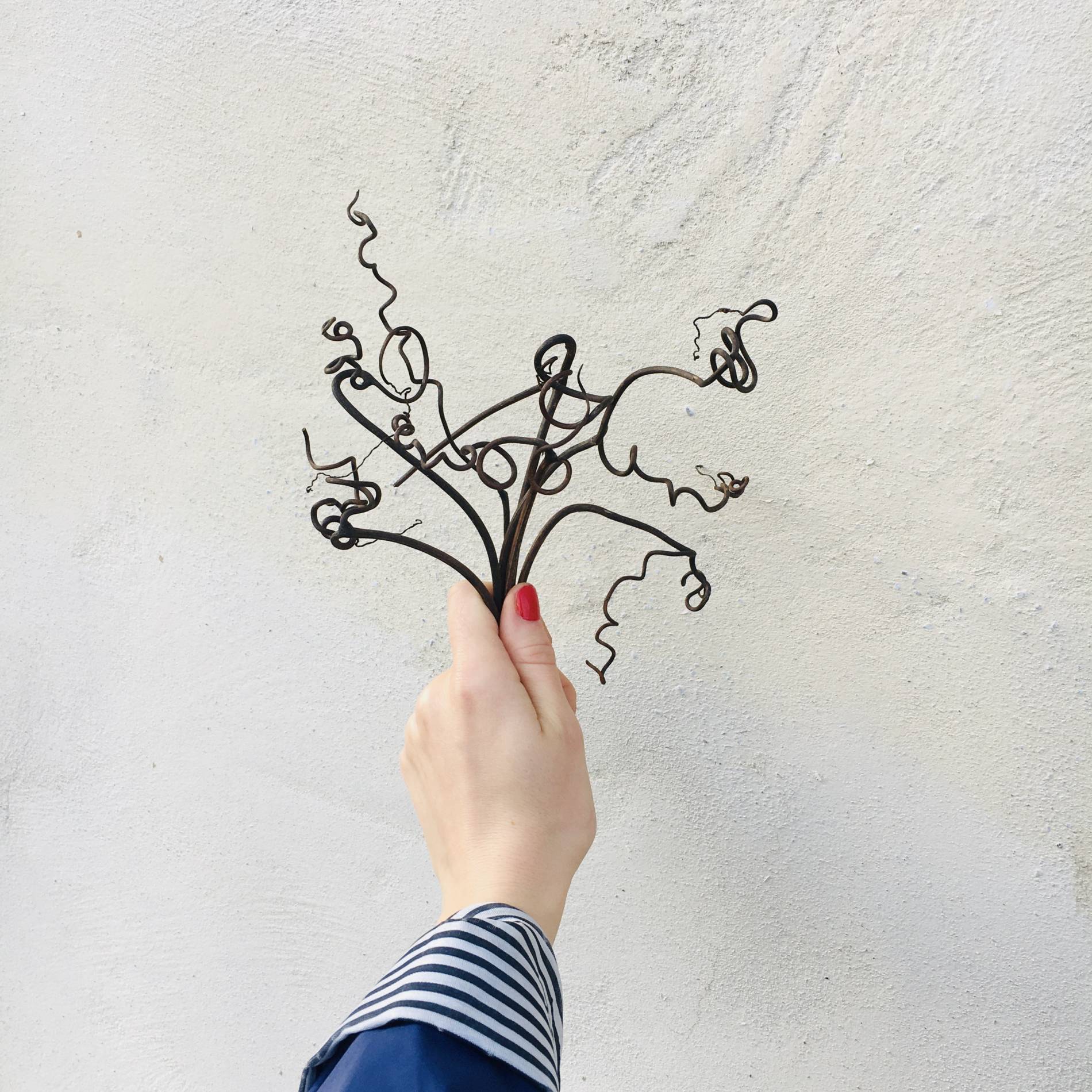 The vine tendril is a striking phenomenon and one that inspires me every time I am working in a vine plot. It has a green color,  a little soft in spring, and firm and determined in summer, brown and very solid during fall. It usually stays on the strings even after pruning, and that’s when I pluck the nicest, lignified, and wood-strong ones, to turn them into pins. If you are curious to see what it looks like, it’s over here!

The tendril allows some plants (bean, clematis, bryony) to climb on a support and as soon as it comes in contact with an object for a sufficient time, it wraps around it forming a strong point helping to support the growing stem. For the vine, they help the plant to go towards the light but they can also and very quickly transform a row of vines into an impenetrable jungle because they connect to the neighbors opposite … The tendrils can be “right-handed” if the turn is done in the clockwise, or “left-handed,” direction in the opposite direction. Darwin coined the word circummutation in 1865 to describe the propeller movement that the spin makes to find its support. Passionflower, for example, can make a full revolution spin in about 43 minutes at 32 ° C!

The tendril of the vine is a powerful structure emerging from a leaf, they are modified flower stalks. They often bifurcate several times and curl at the end, so that the concavity is outside the angle of the two legs. The vine tendril is formed without any need for contact and it only clings when it encounters a support, sometimes the vine grower … but fortunately it is quite slow … It is this contact that guides its subsequent rotation.

Under the microscope, a whole world is revealed since the distribution of cells is different in the curvature and one thinks of receptors stimulated by external contact … there seem to be many secrets still to be discovered. What if touch, smell, and hearing were all valuable sensory information for plants? the tendril seems to be one of the symptoms of plants’ constant adaptation to their environment and their interactions with neighbors. To date, at least 700 kinds of sensory sensors have been identified in plants: mechanical, chemical, luminous, thermal … which makes them hypersensitive and very informed! All the more reason for the juices from the grapes to be accompanied as naturally as possible.

FROM LIVING TO METAL ? 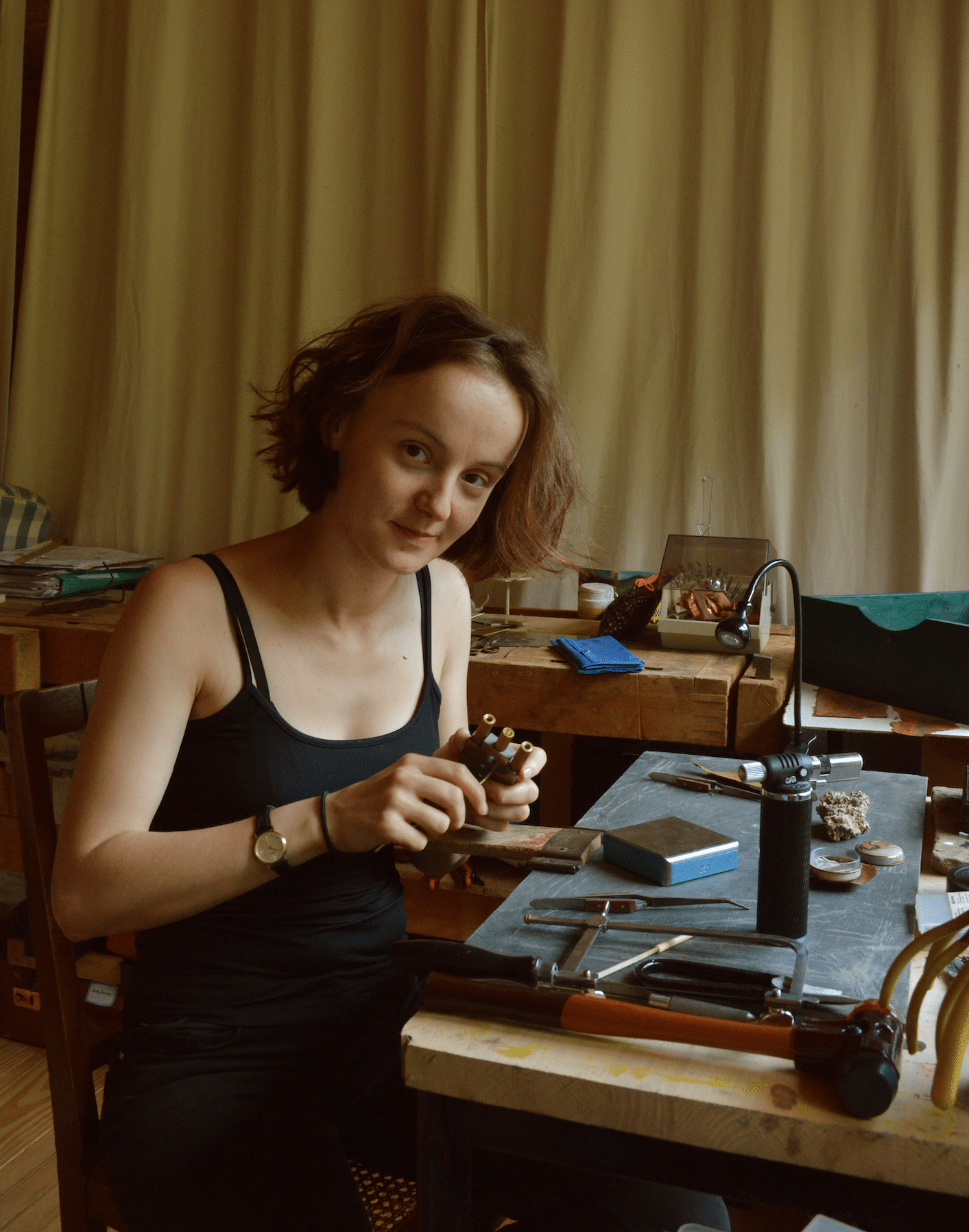 GLOU: Common noise of a liquid (wine) that finds its way out of a container (i.e. bottle), which you can hear pretty often around here …

Latest posts from the blog